Scott Little’s debut opera, “The Story of an Hour,” will receive it’s world premiere production on Saturday evening, November 17, at Kent State University. It’s appropriate that the opera will premiere at KSU because Scott is a junior Music Education major there. The one-act opera, for which I wrote the libretto, is based on a Kate Chopin short story with the same title. Scott and I met just two years ago, introduced by a mutual friend shortly after I had decided to look for a composer interested in a collaboration. We had a first coffee in December 2016, and what’s happened since has been amazing: by June 2017 we had a reading at my home of a complete draft of the libretto, a first sing-through at Kent in November 2017, and now here we are.

I interviewed Scott this week about his experience composing his first opera. Here’s what he had to say:

The Opera Evangelist: I remember clearly that when we first had coffee, I knew that you were someone with whom I wanted to collaborate for two reasons:  you asked good questions, and I could tell you were already thinking in terms of getting it up on stage somewhere.  I’m curious, what about meeting me made you think this might be a workable partnership?

Scott Little: I liked how passionate you were about the project!  I loved how you wanted to do something you hadn’t done before and wanted to expand your artistry.  I really value trying new things and being the least experienced person in the room, which is why I do so many different projects.  I saw those qualities in you, which let me know that working with you would work out!

OE: How would you describe what you’ve learned along the way?

SL: Oh gosh, I’ve learned loads.  I’ve learned how long staged works take to create and what kind of artists have to be involved; I’ve learned about writing for the human voice and how to tell a coherent story; I’ve learned what it means to hustle in order to get your work performed (mostly from watching you, by the way); and I’ve learned that I can do it.  There were many moments where I didn’t think I could finish the thing, and so I’m grateful for people like you and Professor [Marla] Berg who kept me going along the way.

OE: What has been the most difficult part of composing this opera?

SL: The most difficult part of writing an opera was holding myself accountable.  You may recall that I was late to turn in music on a couple occasions (see above).  Writing an opera is especially difficult because operas are long and they deal with a lot of emotional content.  In other projects, if I don’t know how to write music that invokes a particular effect/image (e.g., the chaos of a train crash), I don’t have to write it.  In the opera, I had to figure things out that I would have otherwise ignored.  If I were to do another opera, I would set up systems of accountability, such as more meetings with collaborators where I have to show my progress.

OE: What’s been the most awesome part?

SL: I have so enjoyed working with the opera students and faculty at Kent State.  These students have shocked me with how invested they are in the project!  They are super excited to be able to bring characters to life, and I’m learning a lot from watching their processes.

OE: I know you reached out to faculty at KSU early on and along the way.  How important have their help and support been?

SL: Professors Marla Berg and Dr. Jay White have been wildly helpful!  As director of the opera program (and the director of the operas themselves), Professor Berg was the one who decided to program our work.  She took a chance on us, and she has worked very hard to gather musicians and crew members, to stage the work, to advertise the program, etc.  I’m currently taking voice lessons from Dr. White, so I see him coaching students on a variety of pieces—he spends a lot of time honing on in who a character is and what a song is saying below the surface.  Seeing him apply the same expertise to our work when coaching performers has been an awesome experience.

OE: Early on in our work together I told you that I saw the composer as the “boss” in the composer-librettist relationship, and you bristled at the idea.  Now that you’ve completed work on your first opera, do you still feel that way?

SL: I’m still not sure about the composer/librettist balance, but I have learned a lot about the composer’s role in the creation of opera as a whole:  no one person, even the composer, is most important.  I’ve actually been very “hands off” with the rehearsal and staging process over this semester.  The actors, directors, conductors, and musicians have taken charge of the process—I’m just along for the ride!  I think now that the composer is just one cog in a big machine.  As audiences, we give the composer of a work too much clout and need to be more reverent of the people behind the scenes who are making that work a reality.

5 Cool Things about Living in the N.O.W.

Not sure why, but I’ve not yet ever posted anything in this blog about my own participation in the creation of a new opera.  Well, today’s the day.  Tempting though it is to devote this week’s post to urging you to attend tomorrow’s Met in HD Encore of Tosca–you should!–or this weekend’s Aïda at Opera Columbus–can’t wait!–I need instead for today’s post to be a personal one.

Fourteen months ago, in November 2016, I approached then sophomore at Kent State University Scott Little about a possible collaboration on opera.  (I write words, not music, so if I wanted to play in this game, I was going to need to find a willing composer.)  The collaboration has been even more amazing than I’d hoped, and this past Saturday, we had the pleasure of hearing two wonderful professional singers sing a twelve-minute excerpt from the opera we’ve been working on.  It was awesome!  Slotted into the New Opera Forum session of Cleveland Opera Theater’s New Opera Works (N.O.W.) Festival, those twelve exquisite minutes were sandwiched between a panel discussion about the creation of new opera works and an audience talk-back about our opera in progress, The Story of an Hour, based on the Kate Chopin story of the same name.

Here are 5 things that were awesome about the experience: 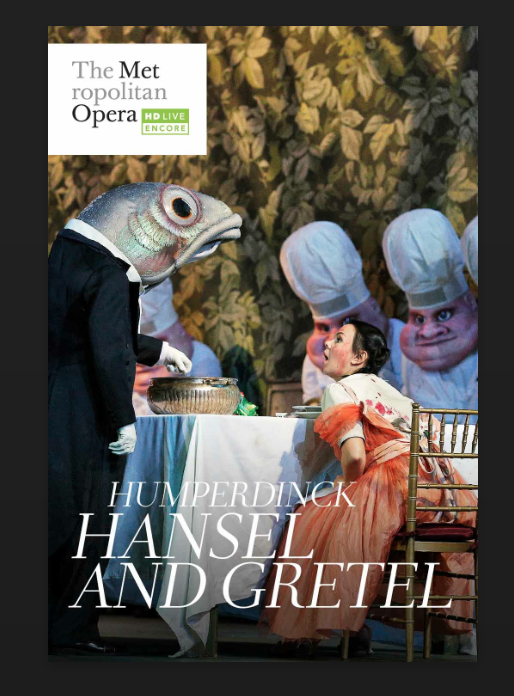 I’ve been skeptical about self-driving cars, but last Saturday, instead of driving me to the hike I’d planned, my car somehow found it’s way to the Cinemark at Valley View just in time for the Met’s special “holiday” encore presentation in HD of it’s 2008 production of Humperdinck’s Hansel and Gretel.  The opera was well done–delightful even–but other than scenes of children stuffing themselves with sweet baked goods, I’m not sure what makes this opera holiday fare.  Here are five thoughts I had while watching Hansel and Gretel in HD: